Aldingbourne residents, Parish and District Councillors and local school pupils came together on Friday 14th October at a special ceremony to celebrate the unveiling of the parish’s first ever community sculpture.

‘Skywards Spiral’ is a large 3.5m high bronze and galvanised steel sculpture created for Aldingbourne by acclaimed artist Richard Janes  and commissioned by the Parish and District Councils and the charity Artswork.  Richard developed the design in a series of workshops with children from three local schools, Aldingbourne and Barnham primaries and Ormiston Six Villages Academy secondary.  The sculpture incorporates the pupils’ research into the history and unique features of the parish.

Arun District Cllr Isabel Thurston formally unveiled the sculpture at the ceremony at Aldingbourne Community Sports Centre attended by local residents, Richard Janes, Parish and District Councillors, representatives of Artswork and many of the pupils involved in developing the design.  Students from Ormiston who are part of a rock band opened the proceedings with an excellent performance of ‘Smells Like Teen Spirit’ by Nirvana.

At the launch, Cllr Michelle Harbord, who led the project for the Parish Council, said:

“The Parish Council is delighted to be able to unveil Richard Janes’ wonderful sculpture today.  We hope it brings a sense of pride not just to all those who were involved in the creative process, but to the whole parish.  The artwork is located centrally in the grounds of Aldingbourne Community Sports Centre where it will provide a new focus for everyone to enjoy”.

“It’s been a real pleasure to work with local children and incorporate their discoveries about the parish into the sculpture.  I’ve made it partly in the shape of a shepherd’s crook, for example, because the playing field on which it’s been installed used to be grazed by sheep, and I’ve included representations of plague masks because the entire village of Aldingbourne had to move eastwards because of the plague.  The design also features local birds, animals and flowers”.

‘Showcasing young people’s creativity in the heart of their communities empowers young people and can have a transformative impact on places. This project is a brilliant example of what can be achieved when quality artists, the local community, schools and young people’s imaginations work together.’

“I’m delighted to see this genuinely exciting project - I love the fact that it’s brought so many local schoolchildren together”.

The sculpture was funded by Artswork with support from Arun District Council using ‘Section 106’ monies resulting from housing development.  Aldingbourne Parish Council provided the land on which to install the work.

Photo attached shows pupils who collaborated on the design in front of the sculpture ‘Skywards Spiral’, with sculptor Richard Janes back left, bearded.

Richard is a Nottingham-based sculptor and artist with an international portfolio of work and substantial experience working with children and young people   His artworks can be found across the UK and in Kuala Lumpur and Canada.

He has been commissioned by both public and private clients to create over 50 sculptures and artworks and has also brought sculpture and real materials to schools, colleges and local communities, including one of the first site specific sculpture trails for the National Trust at Hardwick Hall in Derbyshire, and has exhibited at Tate Britain. 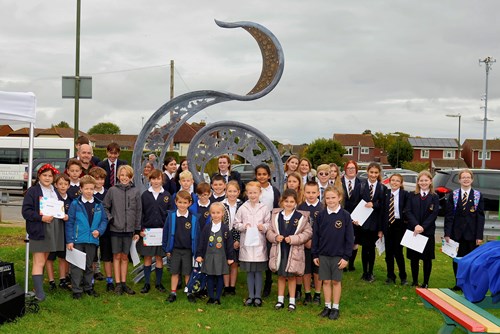 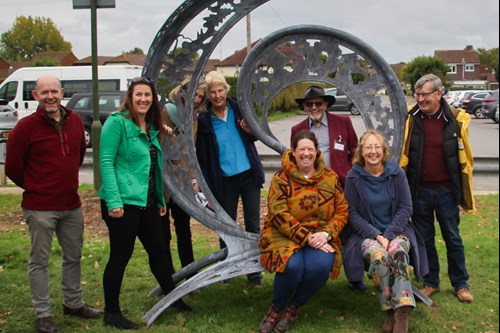 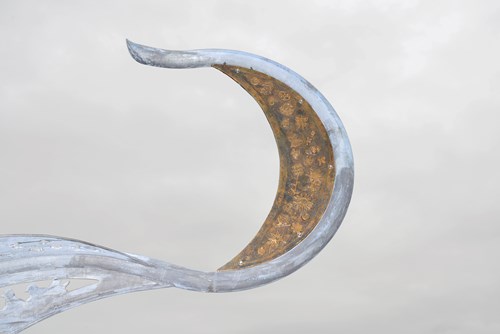 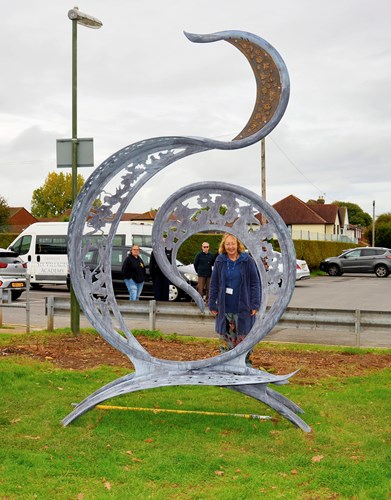 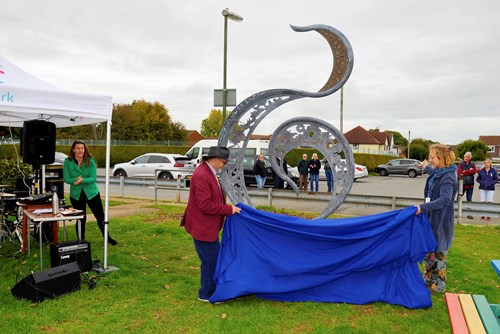