Topography of the Parish of Aldingbourne 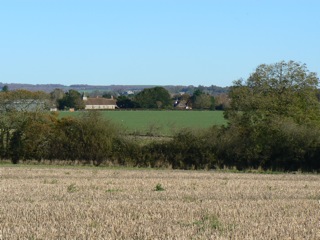 Most of Aldingbourne Parish below the A27 is low-lying, being at or below the 10m. contour, however it rises in the north to the 40m contour ( above mean sea level), the fall towards the sea at Bognor is slight and gradual.

The agricultural land comprises mostly grade 2, the upper half being gravelly, there is some grade 3 on the rife embankments.

There is very little woodland in the parish, but due to the necessity for land drainage, many ditches remain, these are usually lined with hedgerows containing mature hedgerow trees, often of oak and ash.

There are a few copses, for example at Nyton, north of Level Mare Lane (formerly Mount Pleasant) and in Hook Lane, these, together with hedgerows form an important wildlife "corridor" from north to south through the parish.

The rifes and smaller streams between Barnham and Aldingbourne are an important part of the land drainage network (Mewett chapter 13).

They are now part of the Environment Agency’s "Critical Watercourse system" for this part of the Coastal Plain.

Most of the parish could be described as rural in character, apart from the main Westergate settlement.

In the south, the Lidsey landfill covers an area of approximately 80 hectares. As it is a land raising facility, it rises to around 20 metres creating a hill in an otherwise flat landscape. It’s western edge borders the Aldingbourne Rife.

Westergate/Woodgate is a distinct settlement separate from it’s neighbour Eastergate.

It is the western end of what is called the Five Villages, which also include Barnham, Walberton and Yapton.

Westergate is characterised by a diversity of housing types, including small apartment blocks, Edwardian terraces, semi and detached houses from Victorian to modern, small modern estates and former Council housing. This is intermingled with old farmhouses and thatched cottages from the original dairy farming era (some are of Tudor origin).

Despite some cramming Westergate still has a village "feel" to it.

The dispersed settlements of the hamlets and rural areas have strong ties with the main settlement and are well connected to it by public footpaths.